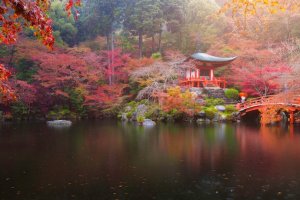 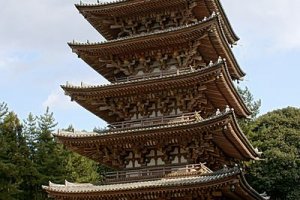 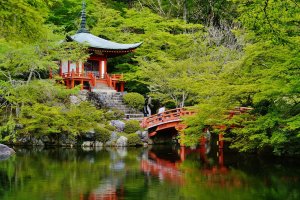 Established in 874, Daigo-ji Temple is one of Kyoto’s most scenic religious sites. The mountainside temple grounds make it a prime spot for both sakura and autumn foliage viewing and its traditional buildings adding to the rustic charm of the scenery. Daigo-ji also serves an important role in the Shingon Buddhism sect, its main buildings holding dozens of precious cultural artifacts — leading Daigo-ji to be designated as a UNESCO World Heritage Site.

The Buddhist temple also holds several other titles, including the ‘Historic Monuments of Ancient Kyoto’ and ‘National Treasures of Japan’. Daigo-ji’s five-storied pagoda is also renowned for being the oldest building remaining that survived the 15th-century Onin War.

Toyotomi Hideyoshi, the famous unifier of Japan, used to hold exclusive cherry blossom viewing parties at the grounds of Daigo-ji. Now, to honor Toyotomi Hideyoshi who helped rebuild the damaged temple buildings, a recreated version of the party is held annually. Known as Hotaiko Hanami Gyoretsu, the lavish tea party and procession is held at Daigo-ji every second Sunday of April.

Sanboin Temple is perhaps most well-known for being the building that Toyotomi Hideyoshi helped reconstruct back in 1598. It was the main building on the temple grounds, used to host the feudal archbishops back in the past. Sanboin’s exquisite Japanese garden is a prime example of Momoyama-period architecture. The building itself also hosts multiple National Treasures and Important Cultural Assets.

Constructed in the year 951, Goju-no-to is one of Kyoto’s oldest national treasures. The pagoda is also revered for being the oldest building that remained after the Onin War in the 1400s. It was originally built by Emperor Suzaku, the oldest son of Emperor Daigo, to serve as a resting place for Emperor Daigo’s soul.

Daigo-ji is one of the best places in Kyoto to view the cherry blossoms, much like how Toyotomi Hideyoshi did back in the 16th century. Approximately 1,000 cherry blossom trees were planted across the temple grounds, with the most impressive being the weeping cherry tree standing outside the Reihokan Museum. It was said that Toyotomi Hideyoshi planted 700 of these trees in order to host his famous hanami party and procession, in which a similar event is now held annually to commemorate and honor his contributions.

10-minute walk from Daigo Station on the Tozai Subway Line

Why not review more places in كيوتو?

Kiyomizudera, or Kiyomizu Temple, is a famous temple on the edge of the Higashiyama district of Kyoto. The temple, whose name translates to “Pure..

Sanjūsangen-dō is a Buddhist temple of the Tendai sect in the Higashiyama district of Kyoto, Japan. The temple was founded in 1164 by Taira no Kiyom..