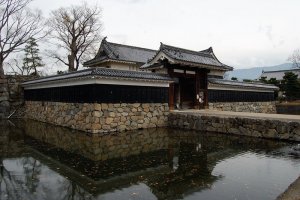 Also known as “Crow Castle” for its unusual black exterior, Matsumoto Castle is one of Japan’s three most beautiful castles, along with Himeji and Kumamoto. With a history dating back to the warring-states Sengoku era, Matsumoto Castle changed lords from the Takeda clan and later to the famous Tokugawa Ieyasu.

Located in Matsumoto, Nagano, the castle is a flatland castle built on a plain; as such, its defenses would have been a series of interconnecting walls, moats, and gatehouses. The keep (tenshukaku) was completed in the late sixteenth century and its original wooden interiors and external stonework have been preserved.

The castle is a National Treasure of Japan.

There are two magnificent black-colored gates leading to the castle. Black was considered the best color at the time and lended itself to a formal image. The Ichi no Mon, or outer gate, would lead people to the palace. Among its eaves, visitors can see the family crests of successive lords of the castle. The Ninomon, or inner gate, is located after crossing the inner moat. One of its interesting features are the small windows where matchlock pistols may be fired from. Photo: jpellgen (@1179_jp) / CC BY-NC-ND 2.0

The ruins of the Honmaru palace are marked by roof tiles in the Honmaru Garden. In the past, the castle consisted of 5 main buildings that were divided into about 60 rooms. In 1726, a fire destroyed Honmaru Goten and the lord at the time never rebuilt the palace, instead electing to move the palace affairs to Ninomaru Palace.

The Ninomaru Palace is thought to have been built following the completion of the Keep, around 1594. In the Meiji Period, the Ninomaru Palace was used as Chikuma Prefectural Office, but a fire occurred on June 19, 1867, and the entire building was burned down. In 1979, a research excavation began and the Ninomaru Palace ruins were restored and now they are open for public viewing.

It’s a 15-minute walk from Matsumoto Station. There is a bus available for 200 yen.

Why not review more places in ناغانو?